Christmas, 1941, the Dutch Submarine, K-XVI was torpedoed and sunk.  This is the story of events surrounding that naval campaign and the search for the wreck and eventual discovery many years later.

Foundation Relatives Submarines
Just 8 days after the devastating attack on the US base at Pearl Harbour in Hawaii the Japanese destroyer Sagiri was part of a second offensive in the South China Sea.  Covering the landings in Borneo, the Sagiri was part of a Japanese convoy in the waters off of Kuching in Sarawak along with the destroyer, Marakumo engaged in anti-submarine patrols.  A trio of Dutch submarines, K-XIV, K-XV, and K-XVI,  were sent to disrupt the Japanese convoy.  K-XIV was able to successfully sink 3 transport ships and a tanker but K-XV missed her targeted destroyer.  Unable to reach the transport ships in shallow waters, the K-XVI attacks both destroyers and sinks the Sagiri, the first warship sunk by an Allied submarine,  but is chased away by the Marakumo when she launched her depth charges.  Hoping to get another shot at the invasion fleet, the K-XVI remained in the area.  Probably on the surface to recharge her batteries during the following day, the K-XVI was torpedoed and sank by one of the two Japanese submarines in the area, the I-66.  The I-66 was the first Japanese submarine to sink another submarine with a single torpedo.


Many years later it looked like the final resting place for the submarine, K-XVI would be lost forever.  Encouraged by the success of Hans Besancon in finding other lost Dutch submarines, Katja Boonstra, who’s father served on the K-16, decided to set up a foundation with Hans’ help, Foundation Relatives Submarines 1940 - 1945, to search for other lost submarines.  In June 2002, the submarine, O-20 was found near Malaysia and in 2003 an attempt was made to locate the K-16 off of Borneo.  The foundation along with their research and exploration of the region brought together a number of strange bedfellows, including Commander William Bill King of the HMS Telemachus, which sank the I-66 and Akira Tsurukami, who’s father the chief engineer on the I-66.


It wasn’t until 2011 that a group of Australian and Singaporean recreational sport divers photographed a sunken WWII submarine.  It was not immediately identified as the K-XVI, since it was in an area nowhere near where it was supposed to have gone down but when experts from the Royal Netherlands Navy studied the photographs, they confirmed its identity as the K-XVI.  Coincidentally, it was in 2005 that the Maritime Mysteries Explorers, Hans and Roz Berekoven, relocated to Borneo and while surveying the waters off of Kuching, rediscover the wreck of the Japanese destroyer, Sagiri.  Now that both ships have been found it is the perfect time to piece together the evidence and look into what happened back in 1942 that lead to the sinking of these ships and what would finally lead to their discovery many years later.


Hans has always been intrigued by this story and the effect it had on the people involved, then and now on both sides of the war.  He wants to tell their story in a fitting memorial to those that died and the surviving members who are coming to terms with the grief and how best to honour the memory of the past.  The following are some of his notes on this story: 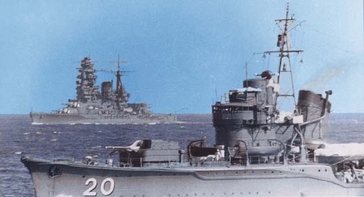 As discussed the invasion of Brunei and Sarawak was the first strike to the west by the Japanese just 8 days after Pearl Harbour.  This invasion was undertaken to secure the oilfields which were vital to Japans war effort. The interesting point was that the Allies (British and Dutch) were taken by surprise because the invasion fleet did not come from Japan but from Cam Ranh Bay in Vietnam just 2 days sail instead of 8 days.
Vietnam was given to the Japanese by the Germans after they had defeated France as Vietnam had been a French colony at the time. So the Japanese were able to quietly assemble an invasion fleet and make a fast strike from the East not from the distant North. The circumstances surrounding the sinking of the Dutch sub K 16 are also interesting. After sinking the Japanese destroyer Sagiri who was escorting the Japanese invasion force at Kuching she was herself torpedoed just 12 hours after by the Japanese submarine I 66.  The controversy surrounds the fact that the K 16 was traveling on the surface in broad daylight while the I 66 was at periscope depth. The Dutch may have not known of the Japanese tactic of shielding their invasion force with a "Picket Line" of submarines and you can bet that the I 66 was forewarned that a marauder was coming their way.
Another interesting angle to the K 16 story are the numerous expeditions undertaken by the Dutch and others including the Maritime Mysteries Explorers. The reason they failed was probable due to the fact that the position of the Sagiri was out by nearly 40 miles so as this was assumed to be the last known position of the K16 the extrapolated search area would have been out by the same amount. As it was the K 16 was found by accident by a team of Australian recreational divers before the Maritime Mysteries Explorers found the Sagiri and determined her exact position.
The human part of the K16 story is perhaps the most moving.  By the end of 1941 the Dutch colonial forces were cut off from Holland which had been overrun by the Germans. The Axis powers were on the move and the mood at the Dutch navel base in Surabaya must have been very bleak. When the K 16 set out on that fateful patrol and the family members said their goodbyes Katja's mother revealed to to her husband an officer aboard that she was pregnant with their first child. He touchingly replied "wonderful now I can never die". They were never to see each other again.
It would be fitting to do this scene as a re-enactment using carefully cast good quality actors and filmed in black and white to fit in with the photos we have. The soundtrack should be from Mark Knoffler's the "Dream of the drowned sub mariner". I am certain there will not be a dry eye in the house.